Born in Hyogo Prefecture in 1970, he received his doctorate (economics) from the Graduate School of Economics at Kyoto University in 1998. In the same year, he joined the National Institute of Advanced Industrial Science and Technology at the Ministry of International Trade and Industry. He has continued to work as the research group leader at the Research Institute of Science for Safety and Sustainability and as a specially appointed professor at the University of Tokyo’s Graduate School of Public Policy and Policy Alternatives Research Institute. Since 2017, he has been a professor at the Osaka University Institute for Datability Science. He is a member of the Radiation Council of the Nuclear Regulation Authority (from 2017) and the Commission on  Policy Evaluation of the Ministry of Internal Affairs and Communications (from 2015), along with holding other respectable positions. His specialty is the study of risk. He is also the chairman of the PTA at his child’s elementary school (2018–2019). 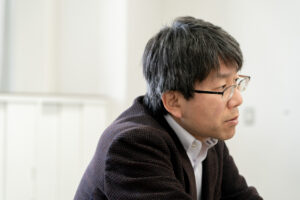 -What is the ELSI Center’s current situation?

Looking back at the chain of events leading to the introduction of various science and technology, in many cases, it has been impossible to respond to the risks involved prior to the occurrence of an actual problem, even when these problems could be predicted in advance. In contrast, when a problem occurs, even in extremely rare cases, regulations are established to prevent such instances from recurring in most instances.

There are also cases in which even the study of the safety of a technology has been avoided prior to its introduction. This is because those undertaking research and development tend to attract external criticisms that “studying the safety of a technology” means that “the technology is likely to cause problems in the future.” Indeed, I consider this to be a very significant problem. When introducing new technology, it is crucial that various possibilities be studied in advance based on the available data and that all manner of scenarios be considered.

However, it is impossible for researchers and technologists to study the ELSI when it is involved with a new technology and consider detailed scenarios and processes for introducing these technologies to society. To begin with, neither science nor technology alone can determine what happens within society, which is entwined with non-technological and complex elements, such as politics, economics, and psychology. Within a society like ours, the ELSI Center should address concrete mechanisms and procedures for installing new technologies that combine findings from various research fields. That is, the ELSI Center should be concerned with the proposal and implementation of governance regarding new scientific technologies by fusing the knowledge of various research fields..

-What specific topics does the ELSI Center address?

In my view, members of the ELSI Center should be engaged in improving the legitimacy, validity, and transparency of mechanisms and processes. This is accomplished through interactions with a wide range of actors inside organizationsfrom the early stages of research, discussion regarding potential problems, and reflections on the process.

For example, one effective method is studying and analyzing past cases. Researchers on genome editing who study and draw lessons from cases of genetically modified crops from the previous century can dramatically expand the range of possibilities when their research is adopted by society. After extracting ELSI-related possibilities and the impacts of new technologies, researchers can hold discussions with a wide range of actors regarding benefits and drawbacks and discern a method for appropriately locating technologies within society. This must be done with some speed while also creating mutual relations between these multi-layer activities.

The subject areas that the ELSI Center is involved in are also not predetermined but instead change in response to the time and changing environment. Initially, my research subject dealt with risk in material fields, such as chemical substances and nanomaterials. However, I expanded my research and became involved in the fields of radiation and natural disasters after the Great East Japan Earthquake and the accident at the Fukushima Daiichi nuclear power plant. In the last few years, I have also engaged in the fields of AI and informatics. Simultaneously, I have expanded the scope from the environment, safety, and health to topics that are harder to quantify, such as privacy and human rights. This chain of events also represents changes in my own work. However, the expansion of risk research clearly indicates, for society and the individual, that the range of “things we want to protect” has widened and diversified.

Naturally, the training of personnel is a vital part of the center’s mission. The ELSI Center was established as part of Osaka University and has developed education programs that allow young researchers who are responsible for the future to learn how to conduct excellent research in their fields, understand their research field from an ELSI perspective, and acquire the ability to develop their research together with society. This education program is open to university members, and plans are underway for an expansion into industry and governmental institutions. In this manner, we aim to encourage both the personnel trained by the ELSI Center and the very ideas of ELSI to take root within society.