Born in Hyogo Prefecture in 1970, he received his doctorate (economics) from the Graduate School of Economics at Kyoto University in 1998. In the same year, he joined the National Institute of Advanced Industrial Science and Technology at the Ministry of International Trade and Industry. He has continued to work as the research group leader at the Research Institute of Science for Safety and Sustainability and as a specially appointed professor at the University of Tokyo’s Graduate School of Public Policy and Policy Alternatives Research Institute. Since 2017, he has been a professor at the Osaka University Institute for Datability Science. He is a member of the Radiation Council of the Nuclear Regulation Authority (from 2017) and the Commission on Policy Evaluation of the Ministry of Internal Affairs and Communications (from 2015), along with other respectable positions. His specialty is the study of risk. He is also the chairman of the PTA at his child’s elementary school (2018–2019). 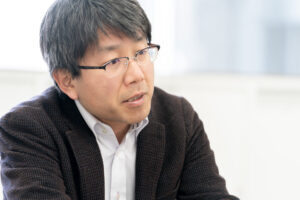 -Why establish the ELSI Center now?

Every day, new technologies are being introduced involving many researchers and engineers. However, new technology must overcome several barriers to assume its place in society. Those attempting to invent technology have engaged in development in a spirit of research. However, the efforts to introduce this technology to society may encounter difficulties. In addition, once society refuses a given technology, it may be impossible to conduct further research on it. Considering this, the ELSI Center must be the intermediary between those producing new technologies and those receiving them so that such gaps can be filled in advance. In recent years, big data and artificial intelligence have increasingly been used in different fields, and an ELSI-oriented response has become necessary across different departments.

One specific example is biometric technologies. Recently, as technologies for identifying individuals, such as facial recognition, are becoming increasingly advanced, handling the detailed personal information that can be obtained through such technology has also become a pressing issue. For example, should we allow personal information of this sort to be sold? If we prohibit such sales, on what basis do we do so? If we allow them, to what extent should they be allowed? Finally, what kind of process should we use to allow such sales? These matters belong, to some extent, to the legal realm, but the debate regarding their ethical and social considerations remains relevant. While some assert that the sale of personal information is similar to the sale of organs and should not be permitted, in Japan, businesses operating as “information banks” have begun to appear, and the accumulation and use of personal information continues to progress.

For such issues, where the line between what is permitted and what is not is drawn differs according to culture and period. Furthermore, new technologies are rapidly developing and can easily exceed the categories established by existing laws. While the establishment of laws is important, we must simultaneously move from the present stage to the establishment of theory by analyzing the essential components for judging the pros and cons of introducing a given technology. Finally, researchers in the humanities and social sciences as well as those in engineering and information technology should think beyond their fields to engage with this topic.

-What sort of qualities should researchers involved in ELSI work necessarily possess?

The conception of ELSI occurred during the “human genome project,” which began in the US in 1990. Regarding the history of ELSI research over the following 30 years, though a community of researchers was created in the humanities and social sciences, some have pointed out that they have lost their critical perspective on their research subject because they have been incorporated into the research community. This should also be assumed to be true for research at the ELSI Center. However, it is not valuable to offer only criticism from “outside” of research on and development of science and technology without providing specific proposals that concern the development of science and technology that contribute to the resolution of social problems. As researchers involved in ELSI studies, we must confront criticisms from those who are developing science and technology and are desirous to implement them within society as well as those who are skeptical of such new technologies.

In this sense, a highly developed sense of balance is required. ELSI research is essentially a field of research in which conflicts of interest inevitably develop, and researchers involved in ELSI research should be cognizant of this fact. In this respect, the main members of the ELSI Center have a long history of achievement.

I was originally a researcher in the social sciences who was involved in the study of standards and methods for the evaluation and establishment of national safety regulations related to new technologies. However, I have always asserted that the “process” of determining the procedure for making such judgments and the standards for judgment should be studied thoroughly. To be precise, I take the position that conclusions are not correct or incorrect in and of themselves, but rather, correct conclusions are obtained in accordance with appropriately established processes. This is related to the visualization of “black box” components that exist between science and technology and public policy and society, which are still uncertain in their earliest stages. Thus, we could verify what went wrong with our processes, in case a problem occurs. Finally, for those involved in ELSI research, when considering social problems, this must be the fundamental stance.